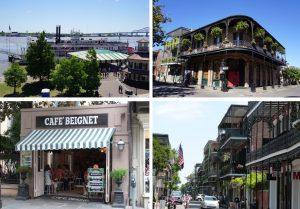 New Orleans, ‘America’s Most Interesting City’, is a city that everyone should experience at least once.  Discover life in the French Quarter, or the Vieux de Carré.  Visiting the oldest neighborhood in the city of New Orleans is a must.  Bourbon Street is recognized as the most colourful and vibrant street of the French Quarter.  Exploring different streets of the French Quarter is important to do as this area offers a tapestry of architecture styles that reveal the many cultures that have influenced the city.

There are many attractions outside the French Quarter that should be experienced as they give visitors a different perspective on the city.  Touring Mardi Gras World is an insightful experience into the art of making floats for the famous Mardi Gras Parade.  The National World War II Museum, a Smithsonian affiliated museum, is an impressive complex that gives unique perspectives on the war.  A street car ride to The Garden District, a district of preserved southern historic mansions is not to be missed.  Travelling to this district allows you to see the wealth that arrived into New Orleans in the early 19th century and shows a different side of ‘America’s Most Interesting City’.

New Orleans is located along a crescent shaped bend of the Mississippi River and exploring along the revitalized waterfront or taking a ride on the Steamboat Natchez allows you to understand the city from the water perspective and enjoy some onboard Jazz Music.  Several ocean cruise companies also set sail from New Orleans, travelling across the Gulf of Mexico to destinations in Mexico & the Caribbean.

There are lots of ways to enjoy a trip to New Orleans, though the best way may be with a coach tour following the path of the great Mississippi River and discovering the historic highlights of New Orleans & the Old South.

Don’t miss out on our New Orleans & The Old South coach tour from April 16 – 25 departing from Sarnia & London, Ontario.